Anyways, back to Superheroic Man. Or is it Superheroicman? The top of the card makes sure you know the name of the figure you are buying.

Heh, I love the name of this bootleg toy. Of course, it’s not the first Superheroic man on this site.Yeah, yeah, I know, the spelling is different on that other bootleg set.

But still, anytime you have a super hero riding a horse, well, it can’t be all bad, can it?

The horse Superman is riding has been seen before on the old site. I’ll leave it to you to find it. Although I admit I’ve dug out that other horse riding figure in order to take new pics. Heh, I also dug it out in order to compare it with another horse riding bootleg toy that will make it to this site someday.
Anyways, back to Superheroic Man. Or is it Superheroicman? The top of the card makes sure you know the name of the figure you are buying. They repeat it four times.

The text that’s on the front and back of the card is ripped off from the Legends Of Batman Dark Rider figure. There are a couple of typos and of course, the bootleggers changed any Batman reference to Superman.

I wasn’t going to bother putting up a pic of the text. But while writing this piece, I changed my mind.

Here. I leave it to you to find the typos. 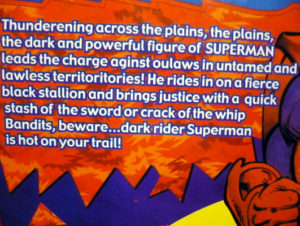 FUNNY, I NEVER THOUGHT OF SUPERMAN AS A ‘DARK’ FIGURE KIND OF GUY. HE’S ALWAYS BEEN A SUNSHINEY KIND OF HERO. YOU KNOW, A RAY OF LIGHT KIND OF SUPER HERO WHEN TIMES ARE DARK.

Here’s a couple of close ups of the figure. Notice the missing logo on the figure’s chest? While the belt looks yellow in the pics, it’s actually more a shade of green. 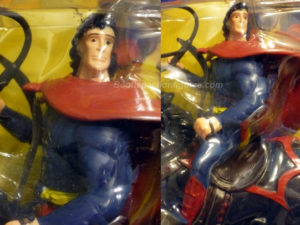 The horse is based on the mold of the horse in the real toy. Superman’s body is also based on the Batman figure from the original Dark Rider toy. Look close at the arm in the pic above. You can see the glove is a Batman glove. The bootleggers just left the hand unpainted. I just wonder where they got the Superman head from. What confuse me though is the boots on the figure. They don’t look like they are from a Batman figure. Spider-Man maybe? Ah well, who cares? Superman riding a horse is just pretty cool. By the way, I’ve had this figure for years and years. It’s so old, the bubble the figure is mounted under is actually turning yellow.